This is the 1st National Trondheim Regiment 1718. This is a Norweigan Regiment. Norway was back then a part of the unified Kingdom of Denmark-Norway. The obvious enemy of these Chaps  was of course Sweden. In 1718 they had to defend Norway and Trondheim against an  invasion by the so called Swedish "Army of Jämtland". The Swedes invaded Norway in a two pronged attack. The northernmost came through the mountain passes of the Scandian mountains. The Army of Jämtland had  the City of Trondheim as it's objective. The Norweigans was eventually pushed into o the city itself and Siege began.  Luckily for the Norweigans the Swedish King Charles XII was killed while besieging Fredrikshall in Southern Norway.  The siege of Trondheim was called off and the Army of Jämtland was called home. During the retreat through the mountains disaster struck the Swedish Army. A large proportion was cought in bad weather and perished.

The Campaign around Trondheim will be a new project that I will start upp. These minis are single based. There is actually one manufacturer that produces 28mm miniatures for this conflict. That is Reiver Castings.

The idea is to use our homebrewed large skirmish rules called Musket Mayhem. Thus far these rules have mainly been tested on the French Indian War and the American War of Independance. Now it's time to test them on the Great Northen War. The theatre chooses is rather obscure even by the standard of this war. However it is ideal for skirmishing. There were very few pitched battles, but there were numerous of small skirmishes.
Posted by Jeppan at 22:05 4 comments:

6mm is something I avoided for quite some time. I thought painting such small miniatures would cause some serious eye problems. However when I saw few examples of 6mm on blogspot belonging to fellow wargamers I somehow changes my mind. So here we have it......an army pack with 6mm ACW minitures from Baccus. I have painted a Confederate army for the game Altar of Freedom. I want to thank fellow club member Mark for getting me started with this project. I also got some painting advice from Keith, another club member and experienced 6mm painter. The trick was to use a kind of conveyor belt technique to get it all painted in reasonable time. 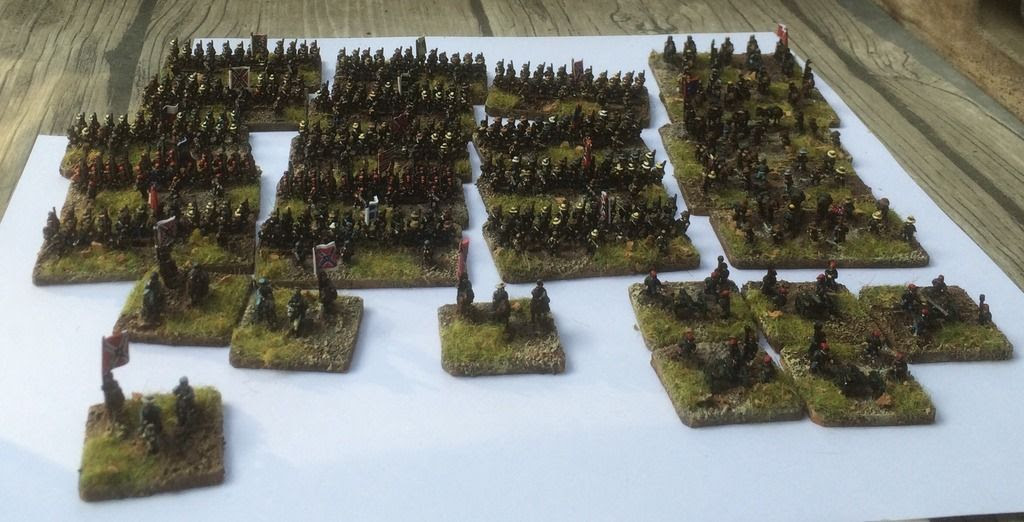 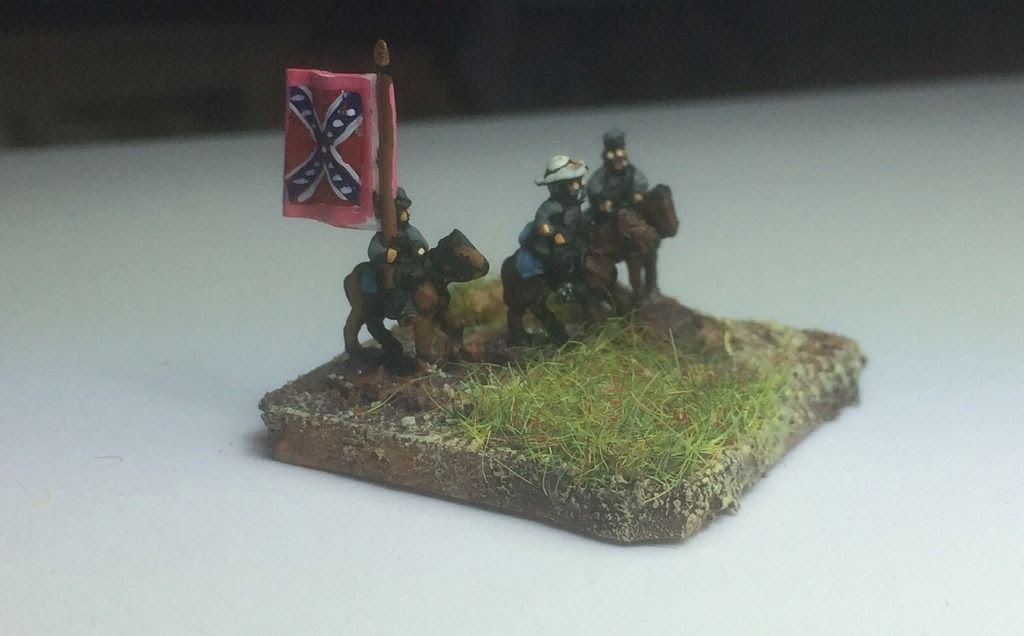 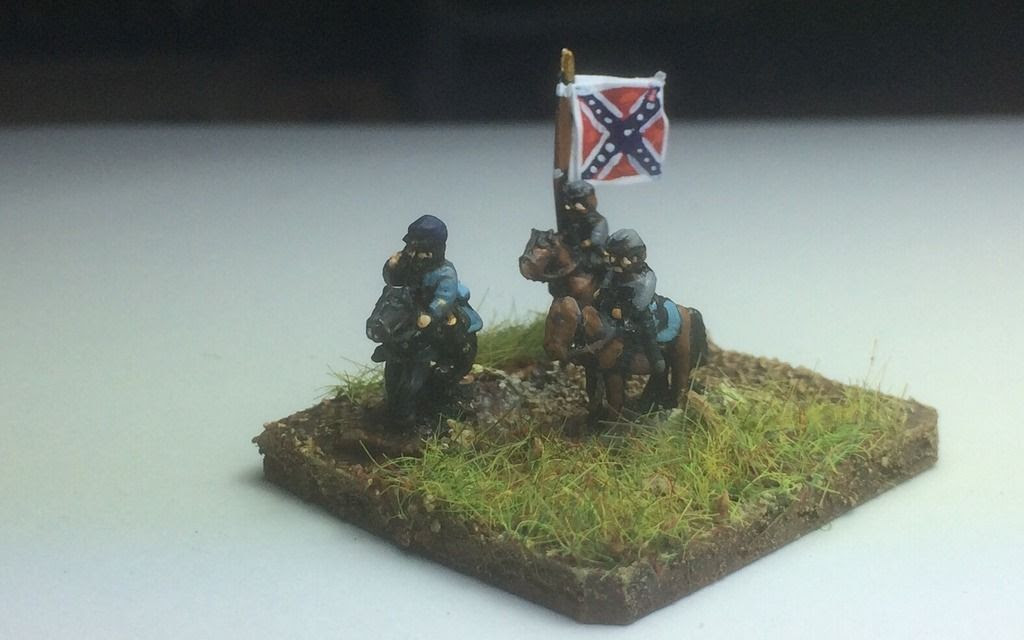 Stonewall Jackson - a small man with a mission 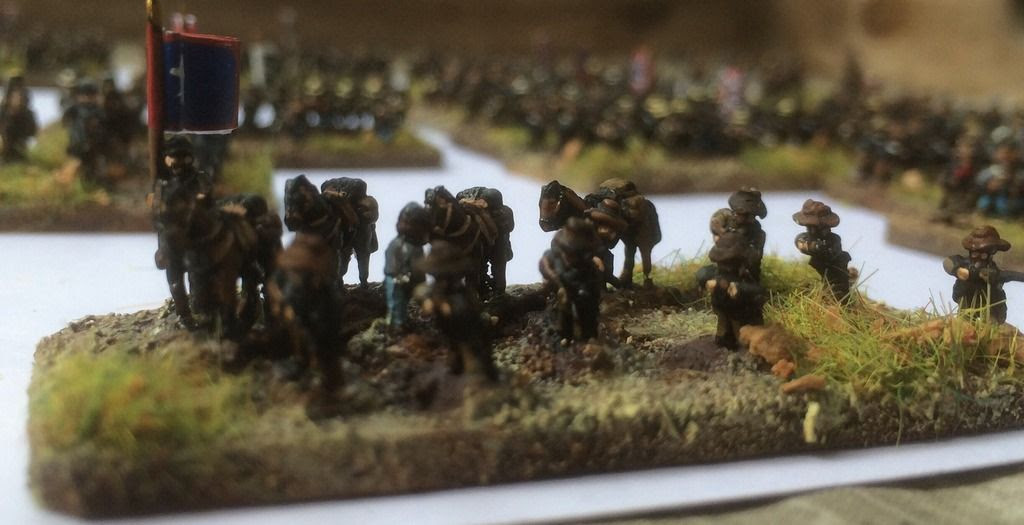 I have some more minatures to report in. The following Great Northen War units were completed roughly two weeks ago, but not posted on this blogg....

First we have the Swedish Kronoberg Regiment from 1710. The units was hurried to the Scanian provinces in order to take part in the final battle of the Scanian Campaign and the battle of Helsingborg. It is an open question if they carried pikés or not in this battle. The uniform coat could have been blue or grey, I have opted for the grey version. This supposed to be a period when Swedish resources were strained. 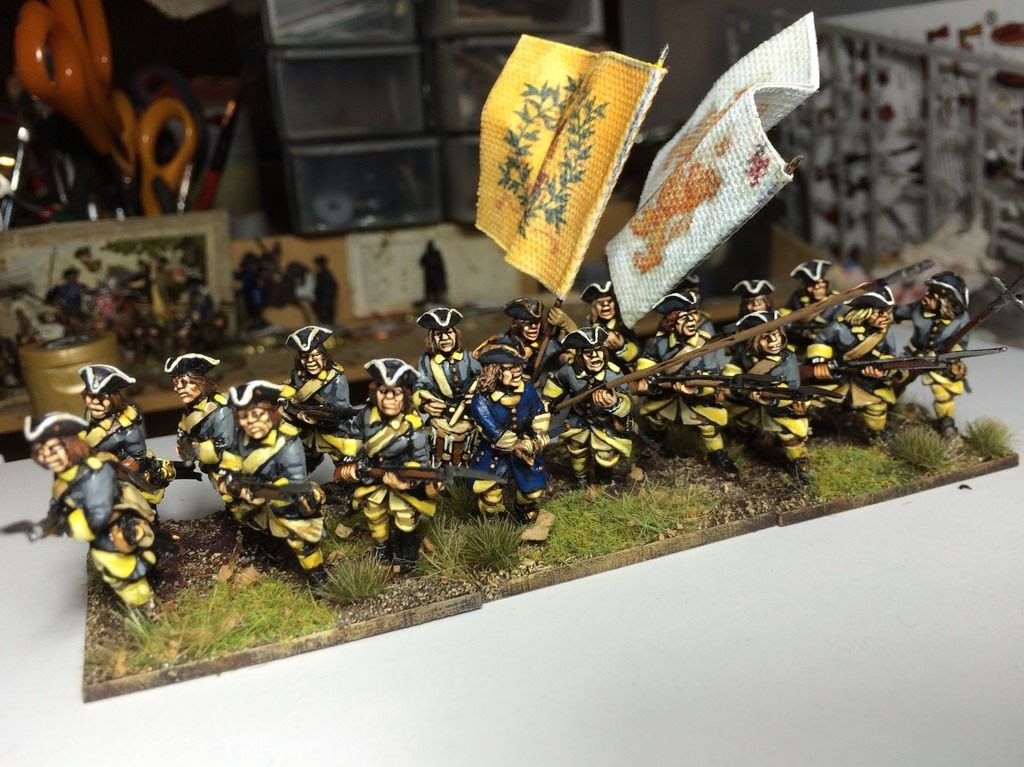 Then we have the artillery. This is a fairly standard looking gun with it's crew. The Swedish artillery always had grey coats of some sort. There are a few variations when it came to sleeves and cuffs, at
least in some sources, but the standard look had to do in this case. 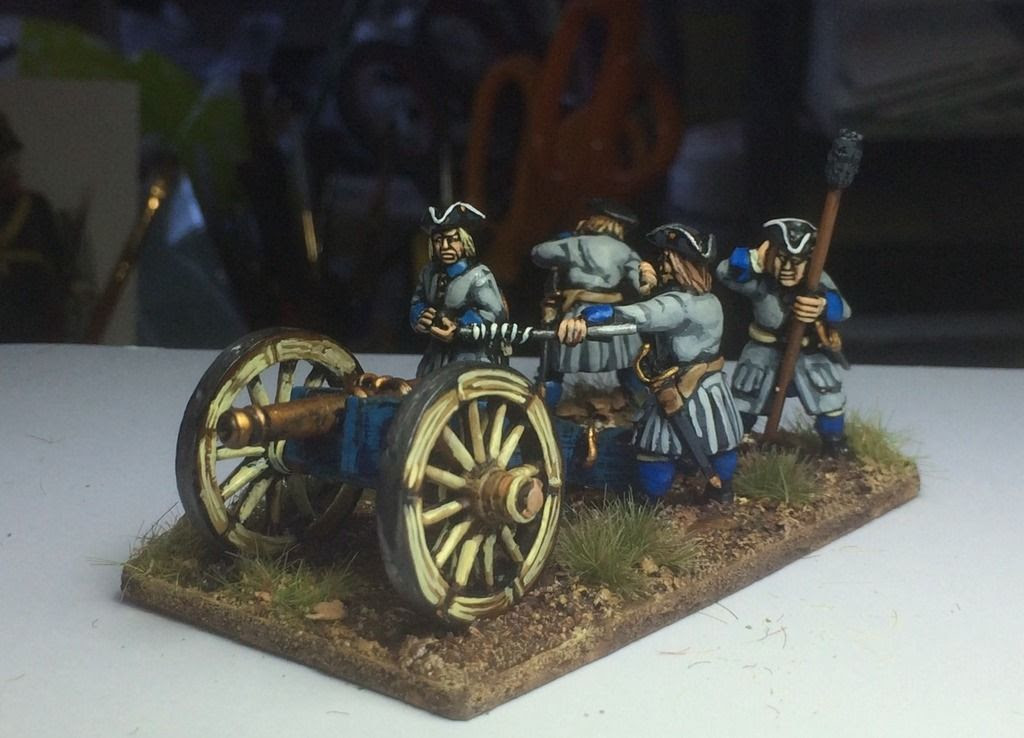 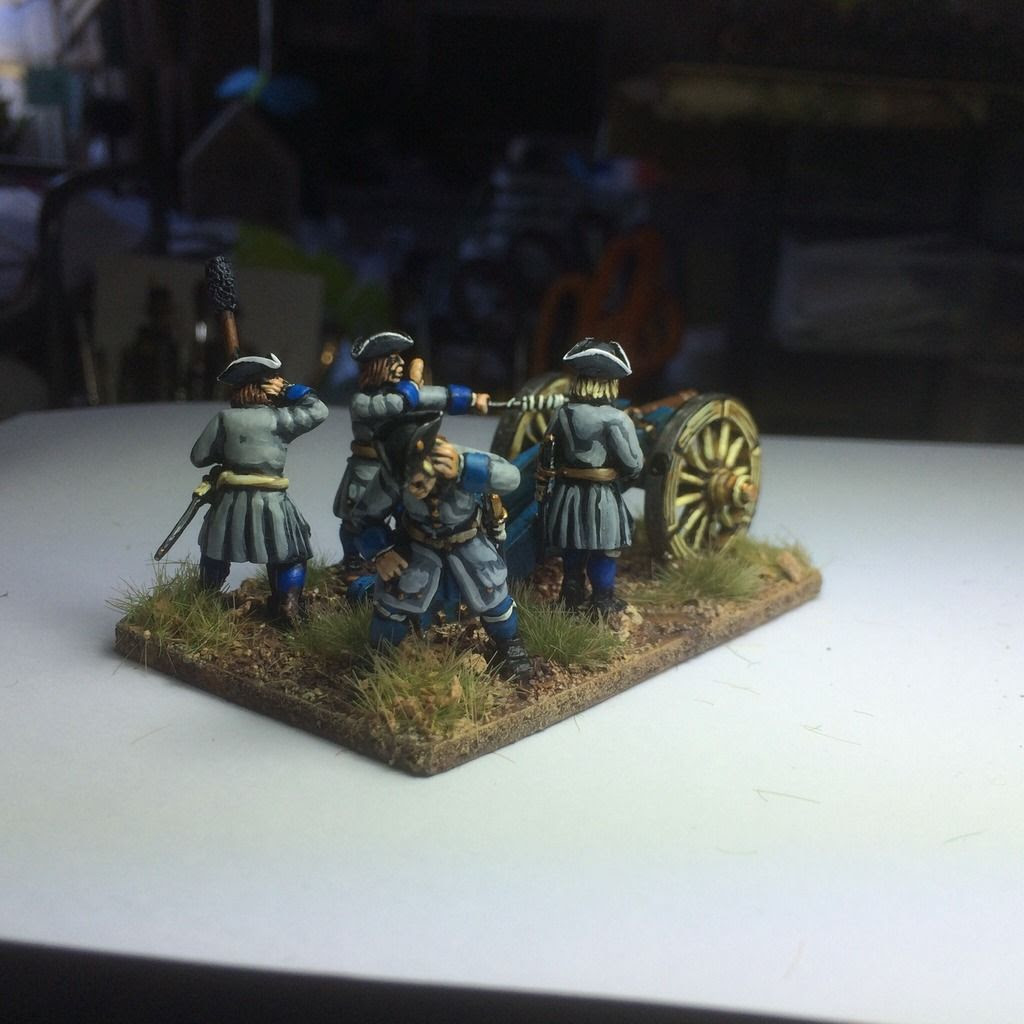 Both units are made up from using miniatures from Muskteer miniatures 28mm GNW range, nowadays produced by Footsore Miniatures
Posted by Jeppan at 23:30 12 comments:

American State Troopers from the 1930s

Round about the time I completed the Danes in my previous blogg entry I also finished a few Pulp miniatures. Apart for my  historical wargaming I have soft spot for Pulp gaming. My favorite set of rules is Pulp Alley. In that game one is always trying figure out new gaming legue combos. The player in this game commands a legue of adventurers that tries their best to annihilate opposing legues belonging to other players. Maybe a group of American State Troopers from the 1920/30s might do the trick. The minis about are from Brigade Miniatures. The Weird brunch below is a combo of minis from Pulp Figures and Lead Adventure. Professor Pinhead is probably my favorite, just the man to handle a doomsday device.....and add few evil laughters 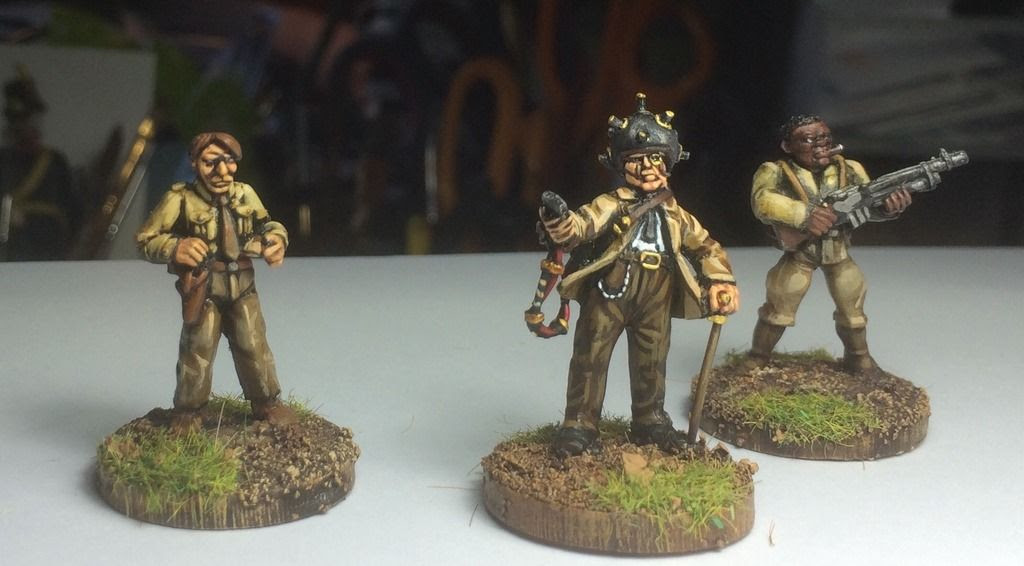 The Weird Bunch including Professor Pinhead 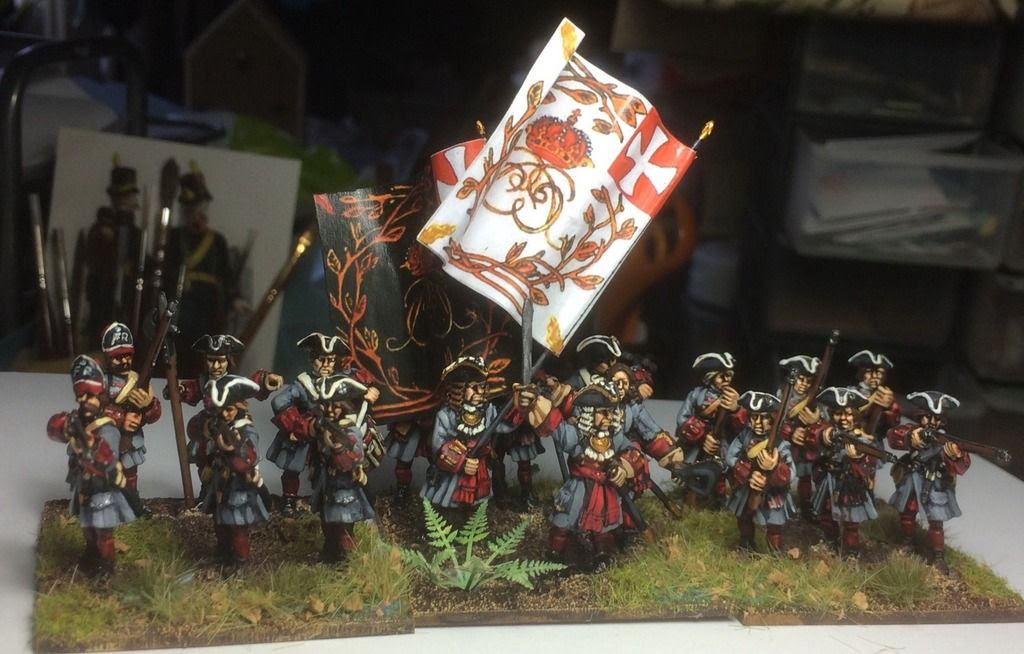 A few more Danes compleated. This is the Infantry Regiment Prins Christian. The era is once more the Great Northen War. This unit took part in the battle of Helsingborg 1710. As for the uniforms the colours are allright, though the grenadier caps might he a bit wrong. The sources specify that this unit used both cloth and fur caps, although it charged over time.  The minis are  28mm from Ebor miniatures. 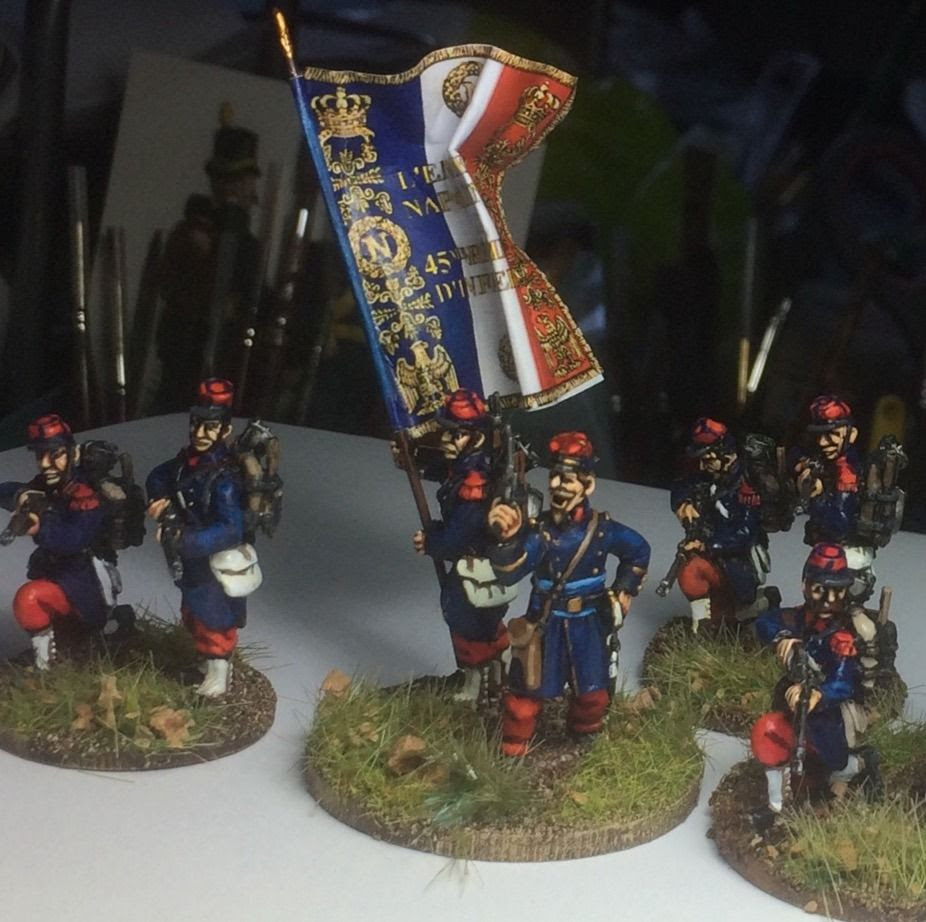 A close up of the Command element

The entire unit, French Infantry from 1870

I have painted some French infantry from the Franco-Prussian War 1870-1871. The miniatures are from a new manufacturer Eagles of Empire Minitures. This new range of miniatures and the company producing them has been set up by my friend Sören.

The minitures are 28mm and sold in a set of 18 miniatures. There is. Set of rules that will be published in some form by Eagles of Empire. The basing is done from instructions given by Sören and more info these rules has to be given by him.

The minis are really good. The casting is clean. My minis had almost no flash. The sculptor has done a good job. The details are crisp and if you check available sources they are correct for the period.
According to the producer the miniatures can be combined with the newer ranges from the same period(for example North Star's 1866 range).

What can be said about the period. Well it is new one for me. I bought these minis mainly because I curious about the minis and the project as such, not because I had sudden urge to paint something from the period. However once put to brush I felt confident that there will be more of this and I need to update myself on the history of this was. It is after all a war that  brought dome to the final French Empire. It created Geermany as unified modern nation and in way paved the way for the coming cataclysm of the First World War. French lost this war and had to hand over sizeable  chunks of territory to the German(Alscace and Lorraine). The French would never forget this and it shaped politics in Euope along the lines that eventually led to the Black Week of 1914.

The French Infantry of this Era had good equipment, for example fast loading rifles. On paper the French army had considerable experince from the Wars of the 1860's. However there was something lacking. Some claim that the leadership left something to be desired. The tactics were too defensive in order to win a war.