The Battle of Lund 1676, The Närke-Värmland Regiment 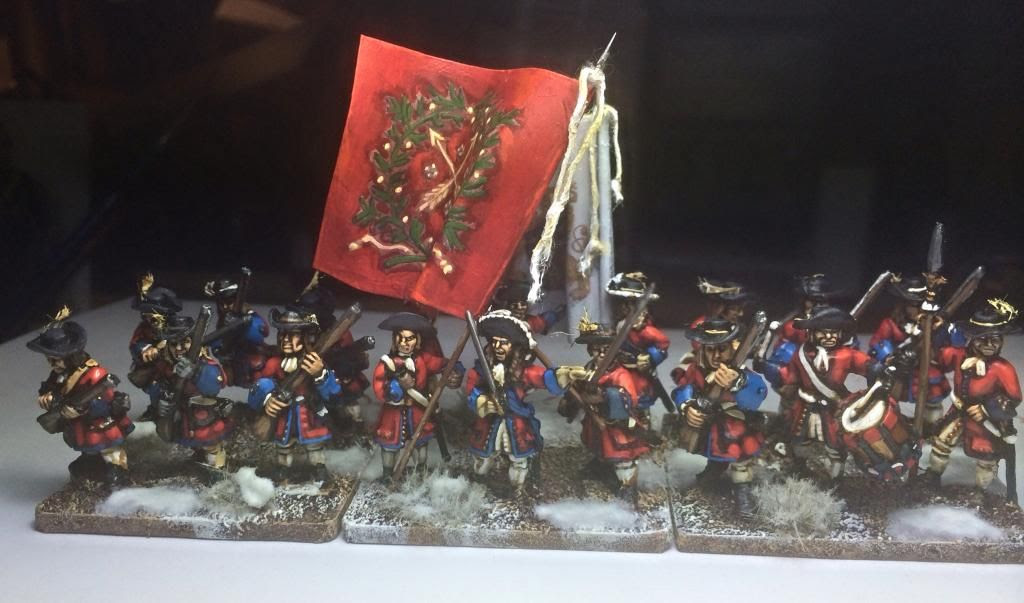 I just finished the  Närke-Värmland_Regiment. Yet an other Swedish regiment. I realized that these chaps have a uniform similair to that of the Danish De Croi Regiment. No wonder
the both sides needed something other than the uniform to distinguish friend from foe. As you can see on most Swedish units thus far have the same field sign. They had some straw tucked into the hatband.

There is a few motley pieces on the work table right now. Whenever one gets beredd with one of them one can always switch over to other. This keeps the interest up, but is not very effcient I assume. However inspired by the efforts of the Shiloh game I decided to finish a piece that been on the worktable for quite some time. It is a unit of Confederate infantry. The unit carries the earlier version of the confederate flag. The flag was bought from warflag and the mintures are from a manufacturer named Renegade. If I am not mistaken Renegade no longer exist. The figures they made were nice though, a bit oversized but good non the less. 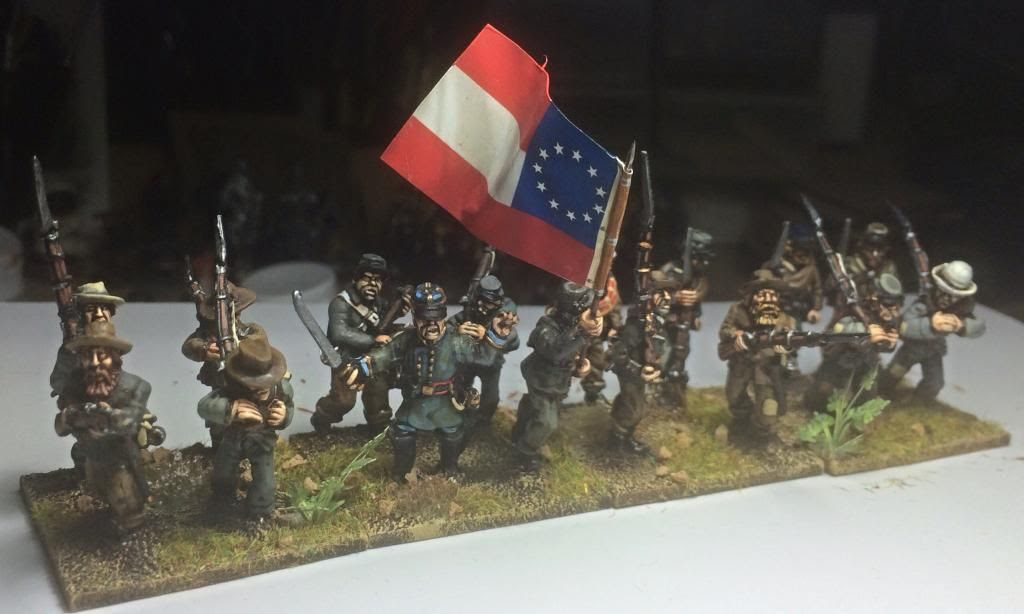 Otherwise the Scanian war project continues. I am now working on a Swedish regiment known as The Värmland-Närke regiment. I will report more about this unit later on.... 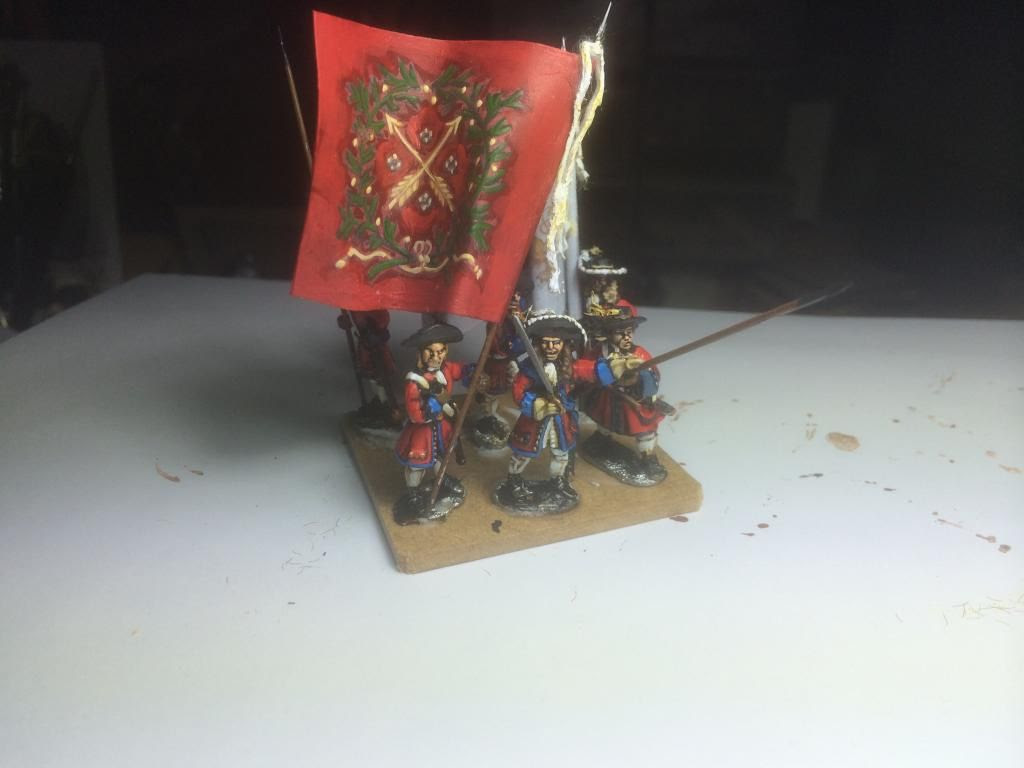 We recently ran a game of Black Powder at gaming club. We on thi case was yours truely, Sören, Ulf and Mark. I had contructed a scenario based on the battle of Shiloh 6-7 april 1862. The basic story behind this battle if fairly well known among many ACW wargamers.

In short the Union army of Tennesee bumped into the confederate  army of Mississippi at a remote location in Southern Tennesse. The South called it the battle of Shiloh. They took the name from a church building present on the battlefield. The Union refered to this battle as the Battle of Pittsburgh Landing. The battle raged for two days. On the first day it seems like the CSA commander General Albert Sidney Johnston's plan to crush Union army led by Ullysses S Grant was going to be a success. In the end it did go that way.  The Cofederates did deliver a massive blow to the Union army, but as they day drew to close it became obvious that Confederates had come close to a full success, but not close enough. The table turned when the Union recieve reenforcement on the second day. The stout defence of the Union position at the so called "sunken road" had given the union time enough to rally it's remaining troops and together with the reenforcement the table turned on the second day and the battle ended with a Union Victory. Not only was a Union victory, the commander of the Confederate forces had been killed at the end of the first day. Albert Sidney Johnston was killed by a shrapnel in the leg  and bled to death. This event probably caused some confusion on the Confederate side that contributed to the Southern failure at Shiloh.

The game we staged was in essence based scenario presented in an article from Miniature Wargamer( may 2012). The scenario focused on a particular situation the first day when the two siides competed for control over a section of the battlefield known as "The Hornets Nest".

The scenario wasn't based on Black Powder. Thus I had to convention it to the Black Powder rules and the minature resroutes we had at hand.  In the end we had roughly 20 units on the Southen side and the North had significatly less. The basic unit in this game was the Brigade. Usually the basic unit in Black Powder is a regiment/battalion, but it fairly easy to relable them and called them a brigade and then you have the ability to stage larger battles. The main theme of this game is confusion and unreliable reenforcements. The orginal scenario provided a system that would generade the renenforcements rather in a unpredictable pattern. I added a few rules to each present general that somehow would represent the general confusion and in some cases sheer stubbornness of the commander.

The gaming table main feature is the "Hornet's Nest" and "the Sunken road". In front of the Hornet's
nest is an open field. There are couple of roads running nearby. The rest is mainly woods or some
other kind of dense vegetation.

Moving anywhere  than in the field or along the roads would cause considerable trouble for the side trying that kind of stunt. In our game no one tried anything  foolish like that.

Most of the fighting went on in front of the sunken road and along the nearby roads. As long as the Confederates tried a frontal assume at the sunken road the Union forces managed

to hold their ground. This is fairly accurate compared with the real thing. The Confederate General Braxton Bragg ordered a number  of attacks head on towards this strong Union position. It was all in a piecemeal fashion and the losses were significant for the attacking side. 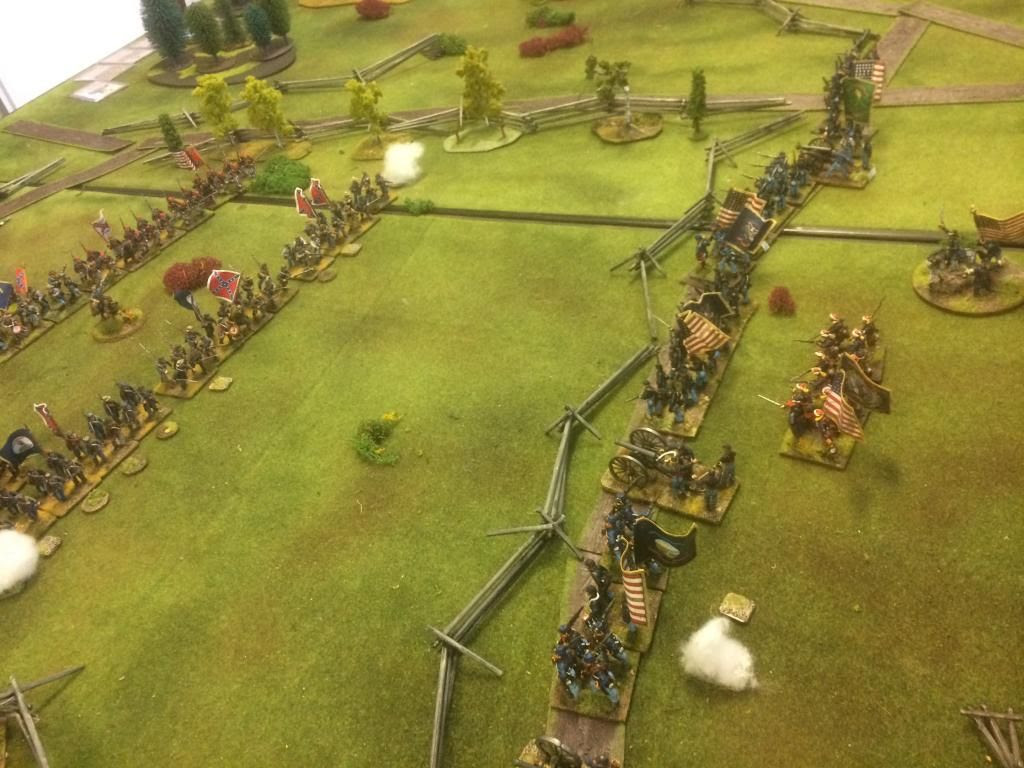 In other game things turned ugly for the union when the Southerners attacked the flanks. In our game they managed to field two seperate flank attacks as well as pinning down the Union forces along the sunken road. Both sides lost several units. There was a slight chance in this game that the Union would stop the Confederate onslaught. However reenforcements comming to the southern side and some succesfull marching dashed the hopes of the Union. In the end the Union forces got flanked,  swamped and broke down. 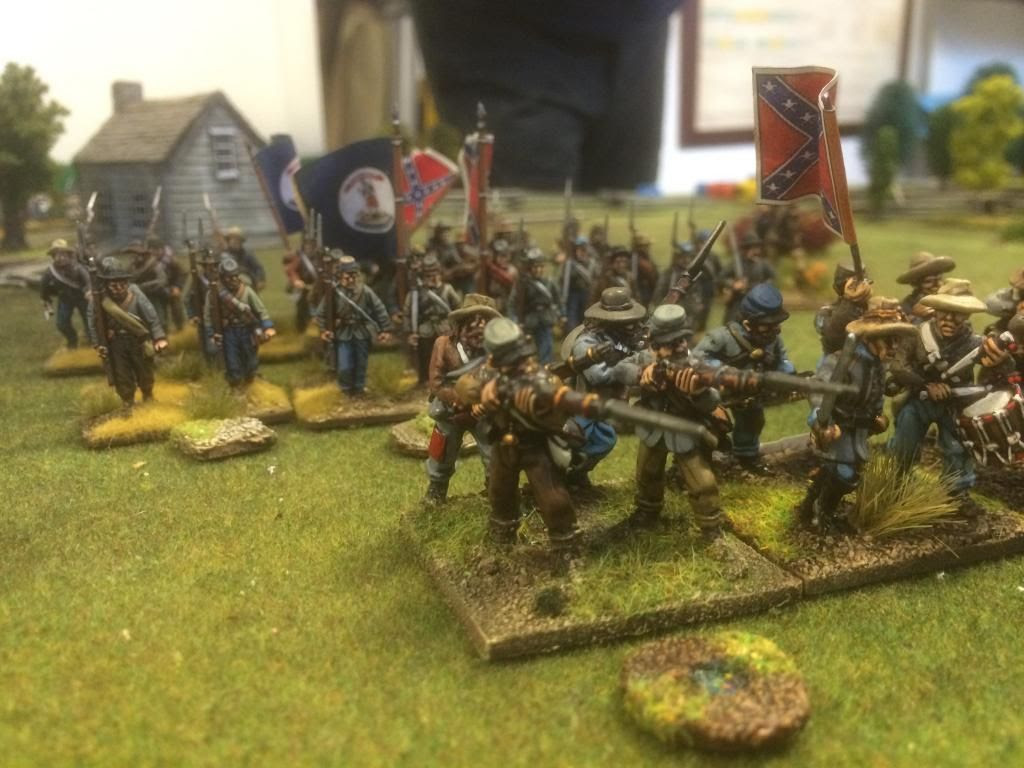 The game was the second major ACW battle we managed to staged using Black Powder rules. The first one was Chancellorville. In that game we managed to change history. The Union won. In this game the Union was not as lucky. The whole affair ended more or less like the Historical one.

What are the lesson of these two sessions? Well first of all one need a whole day to stage in all. An evening session won't do. Secondly one must find a way to accuratly render the balance of power between the two combatants without bogging down in too much detail. The gaming table is always a compromise and so will also the representation of the present units be. You can not have each and very battalion represented(not on this scale anyway).

The Västerbotten regiment was present at the battle of Lund. The units was recruited from the northenmost domains of the Swedish king, from the province of Västerbotten. One curiosity around this regiment was that during the mid 17th century some of the soldiers where part time miners. The soldiers worked in the silver mines of Northen Sweden. This was probably not the case at the time of the Scanian Wars. The regiment was disbanded in 2000.

This units was created in 1630 and existed until 1997. Just like the Västerbotten regiment is was recruited mainly from Northen Sweden. It's first commander was Joakim Brahe a distant relative  of the famous Danish astronomer Tycho Brahe. The banner for this unit is an educated guess. I was't able to find a reliable source for what it would have look like in the 1670's. However the standing goat is a symbol used though out it's existance. It's also the symbol of the province of Hälsningland(the province where the unit was garrisoned).
Posted by Jeppan at 18:33 5 comments: 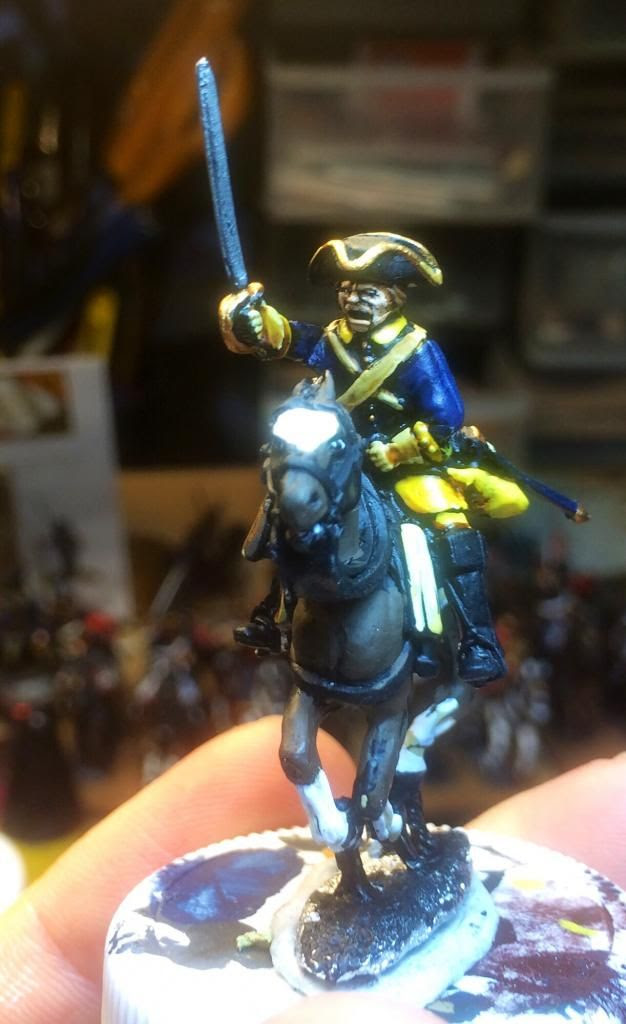 At the moment there is not much finished on the workbench. At Times' keeping focus can be a bit of a problem. However soon I will be able to finish other unit for the Great Northen War project. The tiny gentleman about is a member of the Småland Cavalry regigement in it's 1708 incarnation. Slightly diffrent from the appearance 30 years earlier. There skall be six of them well all is done. 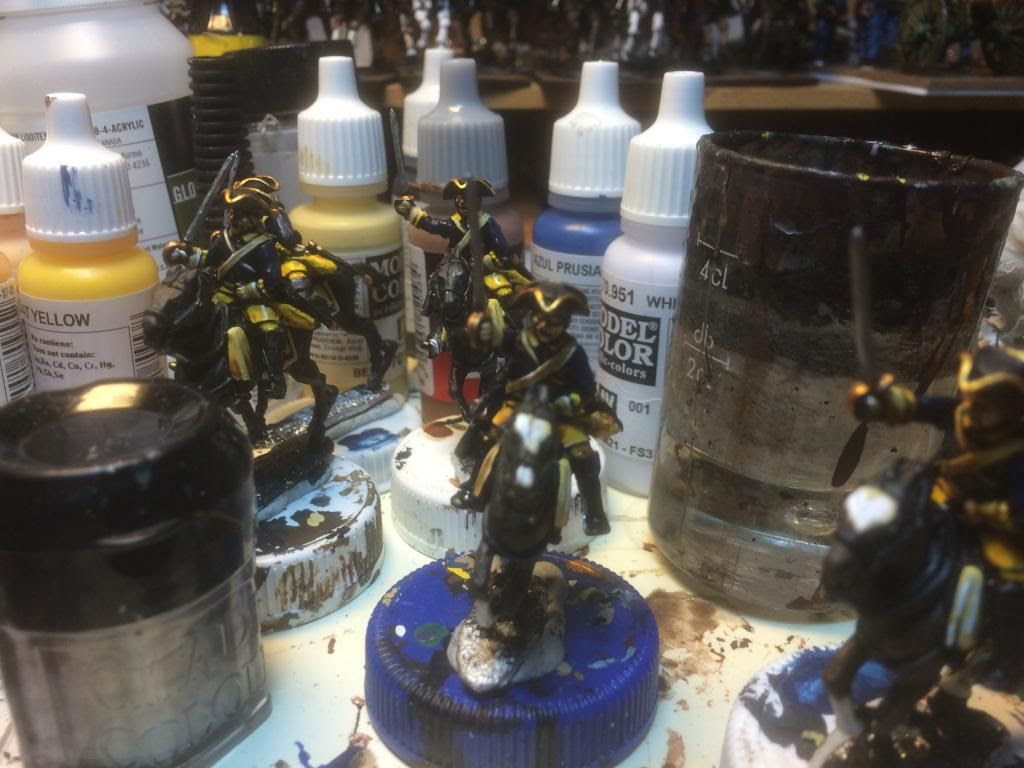 The Battle of Lund 1676, earlier works

Lately I haven't been able to paint anything more within this project, exception for the two Danish regimens that have shown thus far. New minis have been bought and I eagerly await delivery. In the meantime I can you what was completed last year. 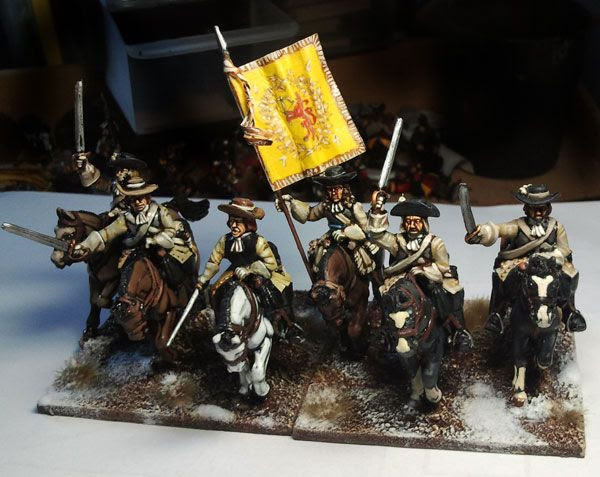 The Småland Cavalry regiment/ The Riders of Småland

The Småland cavalry regiment existed between 1543 and 1927. It had many different names and the organisation shifted quite a bit during it's existance. It made itself first known on the battlefields of Europe during the Thirty Years war. It was then known as"Smålands ryttare"( The Riders of Småland).  It took of course part in the Battle of Lund in 1676.  It became The Småland Cavalry Regiment in 1684. It also took part i the battle of Hollowczyn 1708, therefor it will also be part of our Great Nothern War project. However this menas that we must paint in it's 1708 appearance as well. At the moment I am not sure if I will do the honour or if this will be something  Done by one of my club mates. 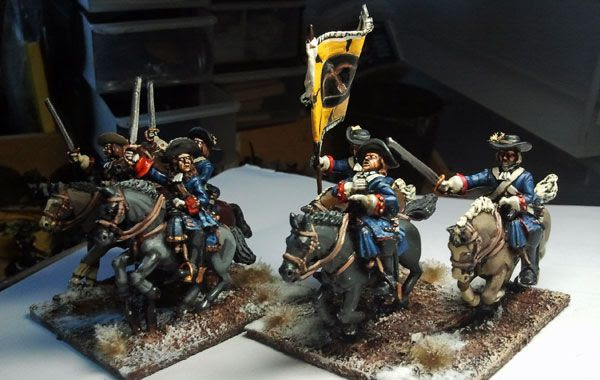 To the left you can see the Savolax Cavalry regiment. This one of the units the King of Sweden(Charles XI) recruited in in his Finnish domains.
Posted by Jeppan at 20:10 9 comments:

I found a wood model of a small Scandinavian cottage at fleamarket a while ago. It was bare wooden model without paint or decorations. Probably some kind of souvenir. The scale? -Well more or less fitting for 28mm miniatures. The roofing was made out of dried natural moss an lichen. So I started with a serious cleaning of the model. Then applied a new cover( once more a piece of a towel). There were som clump foliage flock applied to it as well, otherwise roofing had been a bit too even.
Finally some colour and coating was added to it all. The end result was this cottage suitable for all kinds of Scandinavian enviroments. More terrain to our Great Northen war project.
Posted by Jeppan at 14:44 9 comments:


The comming year one of the main priorities will be the Great Nothern War Project. The basic idea is to set up the battle of Hollowczyn 1708. This was a battle between Swedes and Russians. The Swedish monarch at the time Charles XII had invaded Russia in order to set things straight with Russians(who had teamet up with the Danes and the Saxons).
The battle of Holowczyn was a Swedish victory, but the war was in essence a great disaster.

This is a club project so ther will be a number of participants. Sören and Micke(Dalauppror) will their part as well. Thus great things are to be expected.

I have now completed two units of cavalry. The first is Nyland's Cavalry regiment, a Fenno-Swedish unit recruited in the region surrounding present day Helsinki. The other regiment is Östgöta cavalry regiment, a unit drawing from south- central Sweden. Both unit participets in fight at Hollowczyn. The Nyland regiment also took part in the disaster at Poltava.  I am not sure about the whereabouts of the Östgöta cavalry  regiment after Hollowczyn. The mintures used in these two units comes from two different manufacturers. The ones in the Nyland units are produced by Warfare minatures. The Östgöta are made up by mintures from Reiver castings.
Posted by Jeppan at 15:31 8 comments:

The gadget handeling followers on this blogg has been replaced and it now seems to be there is no problem joining in as a follower. If difficulties do pop up against I will do my best to sort them out. I do apologise for previous inconvenience!
Posted by Jeppan at 10:39 2 comments: