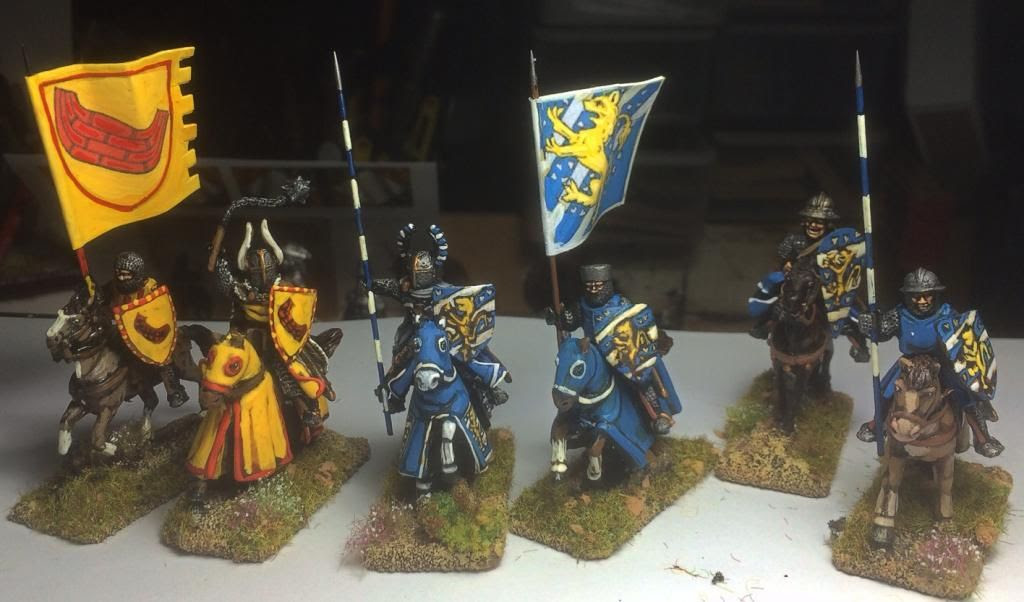 Early 14th century Swedish knights. The Swedish Duke Valdemar of Bjällbo and his entourage consisting if his own knights and those of Bishop Båt of Linköping. The Duke is the knight with the lance and the crest helmet. To the right of him rides the bishop,  swinging his morningstar.
Posted by Jeppan at 22:13 No comments:

Byzantium Bewildered - A Background to our South Italian Campaign

In the early 11the century, southern Italy had been ruled by the Byzantine Empire for several centuries, while the rest of the italian peninsula mostly belonged to various Lombard states.

Italy was too far removed from the heartlands of the Byzantine Empire to be very effectively controlled by the Emperor, who was usually busy dealing with more pressing threats in the Balkans and Asia Minor.
The Empire's Italian possesions were controlled by an Imperial governor, the Katepan. He had a small army of his own, and could call on local Lombard vassal lords. Being the Katepan was not an easy task. With limited resources the Katepan had to keep the neighbouring Lombard duchies in line, repel Sicilian Moslem raiders and invaders, and prevent or suppress periodic revolts by unruly Lombard vassals.

Sicily had finally been lost to invading Moslem armies in the early 900s after almost a century of wars (initial invasion in 827 AD). The rather small Byzantine garrison on the island had put up a remarkably long-lasting defence of various fortified locations, but finally succumbed to persistent attacks. At the same time, further Moslem adventurers and expeditionary forces established bases in mainland Italy, and also in France. The mainland Moslem enclaves served as bases for raiding, but were eventually eliminated after numerous expeditions by Byzantine, Lombard and Imperial German armies.
The Byzantine army of the 1030s and 1040s was still a formidable force, but the days of the soldier Emperors was over, though no one had yet quite understood this. Basil II had a long and very successful reign, but was succeeded by a number of lackluster mediocrities. The lack of Imperial leadership and funding for the army were to gradually reduce its effectiveness over the next few decades. But for a generation after Basil's death, the army was still effective and the Empire continued to subdue new lands. There was, however, an increasing reliance on foreign mercenaries, with Varangians, Normans and Turkic steppe nomads all  present in substantial numbers.

Maniakes in Sicily and Italy
Reconquering Sicily was an enduring dream of Emperors and several attempts were made. The one that came closest to success was the expedition of George Maniakes in the late 1030s, dúring which most of the island was retaken in very heavy fighting.
The army of Maniakes was representative of larger Byzantine expeditionary forces and contained a wide mix of regular Byzantine units, Lombards and the first major wave of Norman adventurers to operate in the area. There was also a major contingent of the Varangian Guard which was, at least in part, commanded by Harald Hardrada, future King of Norway.

However, while Maniakes was a very good general, he was not an easy man to get along with and managed to alienate large parts of his own army. Some units even left him and operated on their own. At least some of the Varangians along with the Normans and some Lombards were among these dissidents, together with several regular Byzantine units.

Maniakes was eventually recalled after making some proteges of the Emperor his personal enemies. Lacking his leadership, the campaign against the Kalbid Emirs of Sicily quickly stalled and the recent gains were largely lost. Maniakes was hurriedly reinstated (presumably to the dismay of his enemies) and even made Katepan of Italy.
But having lost confidence in the Emperor, Maniakes quickly rebelled, abandoned the Italian venture, and marched on Constantinople
His rebellion seemed to be succeeding when Maniakes died suddenly.

It is in this uncertain time with shifting loyalties, various people claiming the Imperial Purple and large forces of the most varied origin all roaming about Italy, that our campaign begins.

Aftermath
The next few decades saw the Byzantine Empire slowly losing authority under a succession of inept rulers. In its place, the Normans became more and more powerful under a remarkable series of dynamic and ruthless leaders. On the Italian mainland, the Normans went from being locally hired mercenaries to land-holding lords in their own right, subduing local Lombard lords and slowly but surely wresting control of the entire region from the Empire. Finally in 1071 the final Byzantine-held city fell to the Normans.
Not content with this, the Normans invaded Sicily in 1060 and spent the next 30 years gradually conquering the entire island and creating the Kingdom of Sicily.


If you feel like reading up on this colourful period, here's a few suggestions:
Posted by Tabletop Gamer at 22:07 No comments: 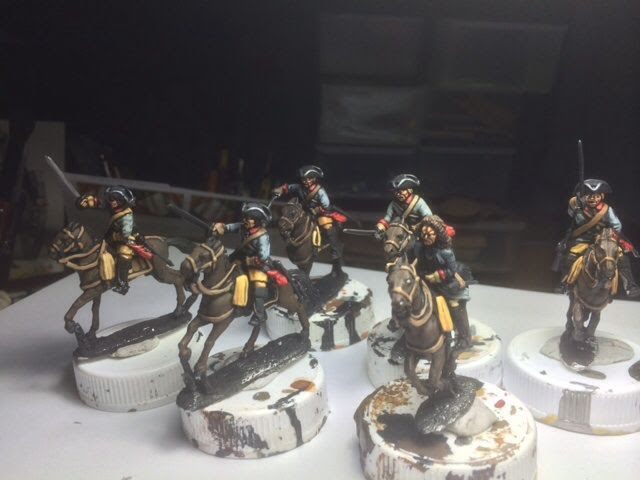 This is another project I am working on. I want to paint a Swedish army for the Great Northen War. This unit is Fenno-Swedish unit named Nyland's cavalry regeiment. It was recruited in the pronvince of Nyland, hence the name. The units is uniformed a bit diffrently compared  with the usual standard of the Swedish army at the time. The usual blue and yellow is replaced with grey and red.
Posted by Jeppan at 21:50 No comments:

This time I am painting a group of Swedish foot soldiers from the early 14th century. Our club is running a project called "Håtunaleken". The aim is to recrate the Swedish civil war  that took place between 1306 and 1317. These gentlemen are the armed hoast of Duke Valdemar of the house Bjälbo.  Duke Valdermar and his brother Erik staged a rebellion against  their brother the King(Birger). 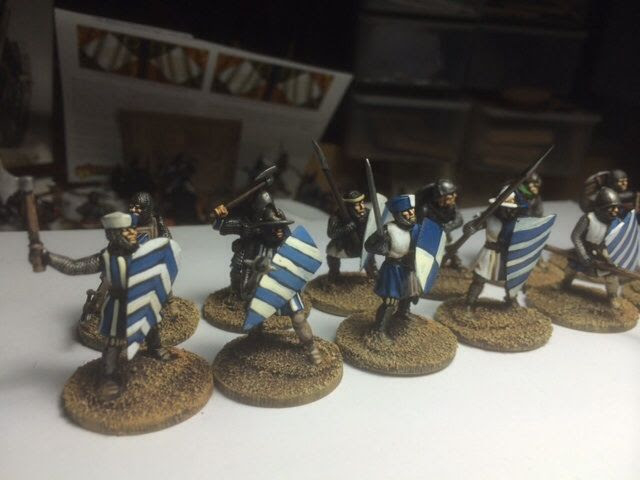 The setting of our  Lion Rampant game is southern Italy somewhere around yet year 1040 AD.  Two compeating Byzantine generals are fighting for control over what remains of the Byzantine empire in southern Italy. The Normans are Lurking somewhere in the shadows though they still not entered the scene - well with exception of a small group of mercenaries led by devious Norman warlord supporting the Byzantine general Bardos Castroullous. 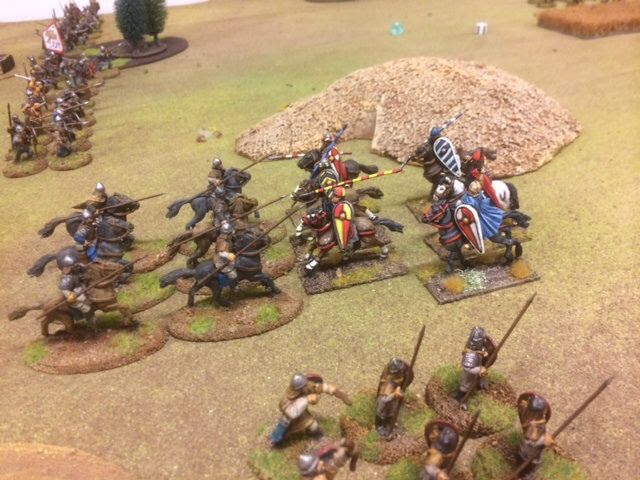 The Norman Warlord Henri de Roullines attacks the forces of the compeating Byzantine general.
Posted by Jeppan at 19:57 No comments:

We have decided to try out the new medieval skirmish game Lion Rampant published by Osprey publishing. The rules are writen by Daniel Mersey.  You need somewhere around  48 mintures side in order to play a standard sizeable game. Though you can get away just half that number mintures if you play with a bit more expensive unit types.   We found the rules quite easy learn. A single game of Lion Rampant with a standard size army on each side(24 point) took roughly an hour to play. We soon doubled the size of each army and it was still possible to play a game in one evening session. That is the definition of a fast play rule set. 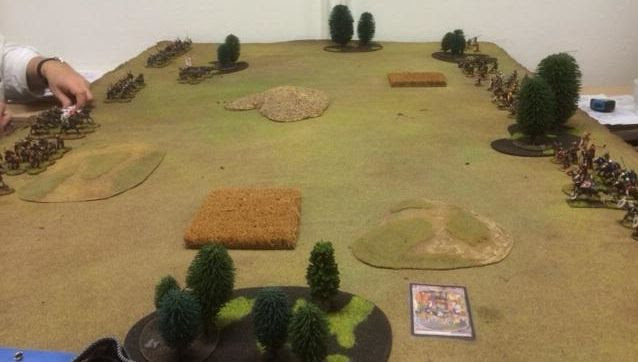 The oppositionen forces are lined up. Sincerely we played with a doubled size force on each side(48points) we decided to play the game with two generals on each side. In a normal game you will have just one each.  We activated each general using custom made cards. Each card represented one of the generals. 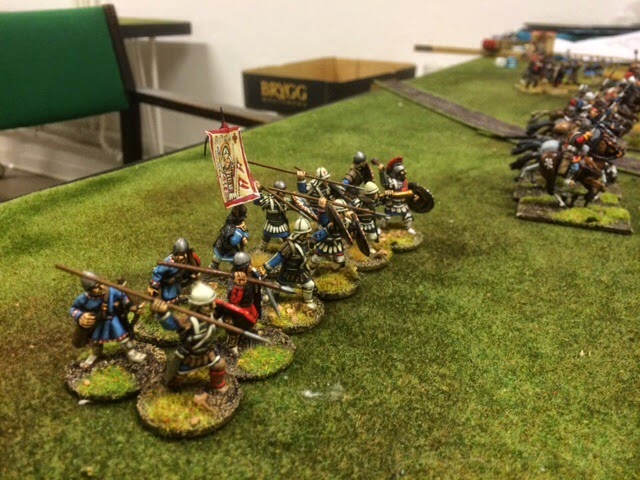 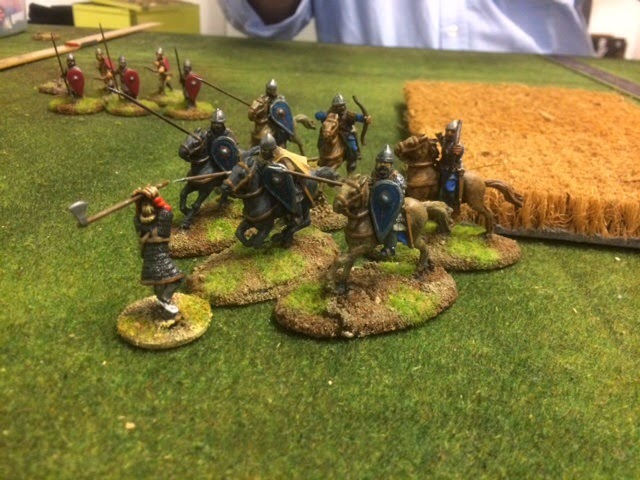 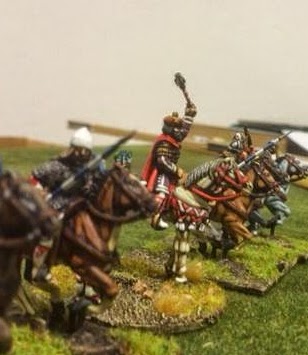